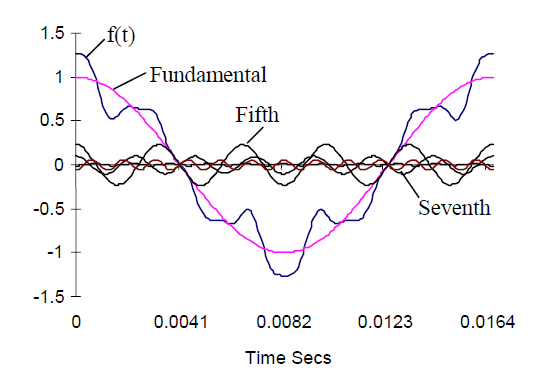 Harmonic is an unwanted interference that directly affects the quality of the power grid and should be taken into account when the total harmonic currents are higher than the allowable limit. Harmonic current is a current whose frequency is a multiple of the fundamental frequency. For example, a 250Hz line on a 50Hz grid is a 5th harmonic. The 250Hz current is an unusable energy flow with devices on the grid. Therefore, it will be converted to heat energy and cause loss.

How is the comedy line created?

Harmonics can cause cables to overheat, damaging insulation. The motor can also overheat or cause noise and fluctuations in the torque on the rotor leading to mechanical resonance and vibration. Capacitors overheat and in most cases can lead to dielectric destruction. Electrical displays and lights may flicker, protective devices may cut off power, computers may fail (data network) and measurement equipment may give incorrect readings.

The rectifier circuit in 3-phase inverters using pulse width modulation (PWM) technology is usually a 6-valve diode bridge. Such rectifiers are simple, rugged, and cheap, but the input component contains many low-order harmonics.

A 12-valve diode rectifier bridge is made by connecting two 6-valve rectifiers in parallel, which produces a smoother current than a 6-valve bridge. Similarly, a 24-valve rectifier is simply made up of four sets of six valves together.

An IGBT active converter can be used to rectify the input AC voltage. It will help to improve the power factor, reduce harmonics and bring many benefits such as: Safety even when power is lost; precise full-range control in rectification and regenerative modes; allowing energy to be returned to the grid; The supply current has a near sine waveform with a small harmonic component. The IGBT has less low harmonics at low frequencies, but high gain at higher frequencies; capable of raising voltage. When the supply voltage is dropped, the DC voltage can be boosted to keep the motor voltage higher than the supply voltage.

In inverters with 6-pulse diode bridge, the grid-side current is non-sinusoidal and contains bi-harmonic components, especially 5th and 7th order components. It is represented by a distorted current pattern, which can be up to 30-50 %. In ABB’s harmonic reduction inverter, the use of DTC (Direct Torque Control) method and filter will reduce the harmonic current by less than 5%. The result is a sinusoidal current that makes the shape of the mains voltage almost distortion-free.